Euroshore, the association of port reception facilities in Europe and beyond, has seriously invested in the recovery and recycling of oily waste from shipping. In the context of the principles of circular economy, we believe that this recovered oil can be used more sustainably. Moreover, other types of waste, such as metal cans, glass, paper and carton, and different types of plastics are recycled where possible.

We propose the following definition: 'recycled carbon fuels' means liquid and gaseous fuels, which are produced from liquid waste streams of unavoidable non-renewable origin, solid waste and waste processing gases and exhaust gases of non-renewable origin, which are produced as an unavoidable and not intentional consequence of the production process in industrial installations.

Since the 1960s, heavy fuel oil (HFO) has been the king of marine fuels. Viscous, dirty, yet inexpensive and widely available, HFO propelled a long period of robust growth in international shipping, which carries over 90% of intercontinental trade by volume each year. For many, it is the lifeblood of the maritime shipping industry.

The use of HFO generates a steady volume of oily residues, being 1 to 2% of fuel consumption on board of vessels. Next to oil residue, there is the production of oily bilge water and - on oil tankers after discharging the cargo - oily cargo residues.

The volume of oily waste generated and/or stored on board depends on various factors, such as type, age and size of a vessel; type and age of equipment related to oil separation and storage; and, maintenance of a vessel and its equipment.

A word of explanation on the three categories of oily waste generally accumulated on board of large vessels.

Defined in MARPOL annex I as water which may be contaminated by oil resulting from things, such as leakage or maintenance work in machinery spaces. Any liquid entering the bilge system including bilge wells, bilge piping, tank top or bilge holding tanks, is considered oily bilge water. In addition to oil, bilge water often contains detergents and solvents.

Machinery spaces on large commercial vessels contain a wide array of engineering systems, including those used to manage fuel, lubrication, fuel and lubricating oil purification, saltwater service, bilge and ballast, firefighting and sewage. Each system contains numerous pumps, fittings, control devices and other components, along with extensive lengths of piping. All components are engineered to prevent and minimize leakages through the use of mechanical seals, gaskets, etc. Despite this, because machinery spaces are so huge, waste accumulation of 20 cubic meters per day or more may occur. Bilge collects in bilge wells, and from there is pumped to bilge water holding tanks, where fitted.

Defined in MARPOL annex I as the residual waste oil products generated during the normal operation of a ship, such as those resulting from the purification of fuel or lubricating oil for main or auxiliary machinery, separated waste oil from oil filtering equipment, waste oil collected in drip trays, and waste hydraulic and lubricating oils. 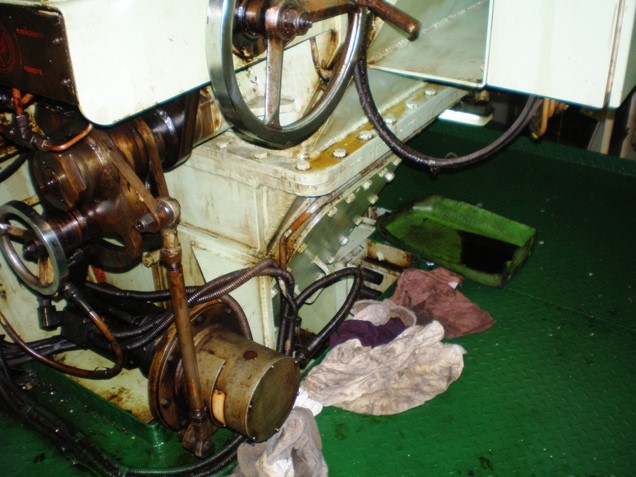 Deep-draught vessels generally burn low quality heavy fuel oil in their engines. This fuel contains contaminates. To prevent damage to engine components, retard wear, and improve combustion, the fuel is purified by centrifuges before entering the engines. At pre-set intervals, a shoot cycle occurs, which ejects contaminates (sludge), which drain to a sludge tank.

Compared with bilge water, fuel oil sludge is generally less varied, and the quantities are more predictable, provided the quality of the fuel oil remains constant. Sludge waste is much heavier than bilge water. As indicated, approximately 1 to 2% of the heavy fuel oil burned in a vessel’s main engine and generators ends up as sludge. Large container ships can consume easily 130 tons of fuel/day, resulting in almost 2 tons of sludge/day. The quantity varies depending on the fuel’s quality, its compatibility with previous shipboard fuels and the condition of the equipment used to store, transfer and heat it.

Main and auxiliary engine lubricating oil is similarly processed. The equipment may be self-cleaning, and the resultant sludge and waste fluids enter a sludge tank. The waste quantities produced in this process are normally less than the quantities resulting from fuel oil. Depending on the engine type, the area between the pistons and cylinders may also be lubricated by a separate system. The waste gravitates to a separate sludge oil tank known as a stuffing box or lantern ring drain tank.

Tankers have many tanks and may carry many different cargoes at the same time, varying from different types of petroleum products to chemicals and food products. As a result, these cargo tanks must usually be cleaned between carrying different cargos. Tanks carrying refined petroleum products can be cleaned by pumping water through the cargo tank washing system, by steam cleaning or by spraying pressurized hot water.

A quantity of sea water, up to several hundred tons, will be taken on board into a slop tank. This water is recycled from the slop tank through the cargo tank washing system. On completion of tank washing, and stripping of the washed tanks and pipelines, the slop tank will contain the saltwater used for washing, the cargo residues, and unpumpable quantities from each tank. These quantities will be measured, the interface recorded, and cubic meters calculated. 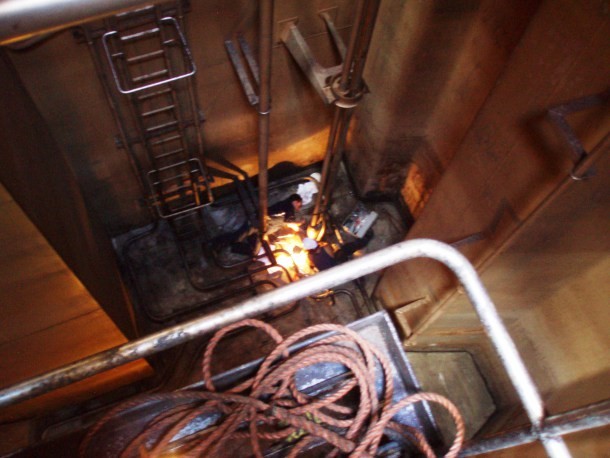 The vessel may choose to discharge a quantity of the slops (water) through its oil discharge monitoring and control system into the sea after the slops/cargo residues have settled out and the interface-measured quantities have been calculated, in accordance with MARPOL requirements.

In the past, the process was essentially the same as for refined product cargo, but in recent years specific crude oil washing (COW) processes have been introduced, which use the crude oil cargo of the oil tanker to clean the residue from the tanks. The crude oil is heated then sprayed using high pressure nozzles onto the walls of the cargo tank. This considerably reduces the amount remaining on board, resulting in savings due to the increased quantity discharged, while also reducing the eventual volume of waste. MARPOL made COW systems mandatory for oil tankers of 20,000 tons or more.

The role of the port reception facilities

Port reception facilities (PRF) collect waste oils by barge or truck, together with solid waste etc. and these PRFs have been trying to give them a second life and in doing so, they are fulfilling the circular economy principles.

We underline that the largest volumes (sludge and slops or cargo residues) of the above-mentioned waste oils are NOT the result of a ‘process’, but are part of the cargo or the fuel. Due to practical and technical constraints these oils end up as ‘waste’ oil. The Maersk Emma, a container vessel of the triple E class, consumes 180 tons of HFO/24h, meaning that the sludge production is about 3 tons/24hours. If you know that yearly 300 million tons of marine fuels are sold to seagoing vessels, we can estimate the annually produced sludge is close to 5 million tons. Europe’s share in international shipping based on fleet ownership and volume of goods imported and exported by ship is about 40% meaning that just about 2 million tons of sludge are landing in EU-ports. The MARPOL I waste is an unavoidable waste stream of non-renewable origin with a very heterogeneous mixture in composition, containing water, hydrocarbons of different chain length and other organic and inorganic contaminants in varying proportions, as a result of the normal ship operations.

There are several successfully tested technologies to recover a high-quality fuel oil and clean water from the hazardous MARPOL I waste. With our treatment plants, and our different proven technologies we will be able to re-introduce millions of tons per year of recovered high-quality fuel-oil to be used in vessels and millions of tons per year of recycled water to be reintroduced in the water cycle, following the objectives of secure and competitive energy supplies and helping to save in fossil fuel import costs in the EU.

With our members’ solution in waste management plants in ports across Europe and beyond, the following economic and environmental benefits are achieved:

In addition, our members’ solution tackles the EU Commission’s Roadmap for a Resource Efficient Europe (‘White Paper on Transport’) contributing:

Revalorization of MARPOL I residues

The Waste Framework Directive (2008/98/EC) is a reference directive, as waste is managed without endangering human health and harming the environment without risk to water, air, soil, plants or animals. The EU has a tendency in terms of end of waste criteria. According to Article 6 (1) and (2) of the Waste framework Directive 2008/98/EC, certain specified wastes shall cease to be waste when they undergo a recovery operation and comply with specific criteria to be developed in line with certain legal conditions. Accordingly, the Spanish Government recently approved the Ministerial Order APM/206/2018, under Law 22/2011 Waste and Contaminated Soil, establishing the criteria to determine when recovered fuel from MARPOL waste (type C) to be used as fuel in ships ceases to be waste. The Flemish authorities have similarly promoted the ‘End of waste criteria for used oil’ study which addresses several final use of re-refined waste oils.

Euroshore members are aligned with these criteria, seeking the revalorization of MARPOL I residues and efficiently separating hazardous substances.

MARPOL I based liquid renewable fuels could be covered by the Guaranteed Origin (GO) system or a similar centralized tracking system guaranteeing the origin of liquid fuels, if they were mandatory. With the introduction of MARPOL I based liquid renewable fuels, the deployment of renewable fuels in the maritime sector would be solved, as it would offer a renewable solution for the maritime sector which is not easy and would create a functioning market contributing to achieve the EU long term energy and climate objectives.

The current FQD (Article 7a) requires fuel/energy suppliers to reduce the GHG intensity of supplied fuel/energy by 6% in 2020 (according to 2010 baseline). A number of elements can currently contribute to the target, such as biofuels from food crops, biofuels from wastes using commercial technologies, 'advanced biofuels', electricity, other renewable fuels and waste fossil fuels. A critical remark: is mixing palm oil with fuels an environmental solution? The production of monocultures’ crops impacts food production for local use deteriorate soil quality.

The solution for this waste streams, if there is no incentive for their recovery, would be to incinerate them, thus, contravening the waste hierarchy as set out in Article 4 of Directive 2008/98/EC. The inclusion of these streams in the Renewable Energy Directive wouldn`t have any distortive effects on markets for (by)products, wastes and residue, as it is an unavoidable waste stream generated because of normal ship operations. The acceptance of our proposal would allow these streams to be covered by a GO system.

Transport consumes a third of EU's total energy demand and it is almost entirely dependent on oil. While transition to low-emission alternative energy in transport has already begun, spurred by the current Renewable Energy Directive (RED), the sector is lagging behind other sectors. There is high potential for increasing renewable energy use in transport through electrification and development of advanced renewable fuels. It is also an opportunity for Europe to develop leadership in new bio-based products, such as advanced biofuels.