Ship dismantling, also popularly referred to as “ship recycling” is a process of breaking down a ship (also called ship breaking) when it completes its life tenure. As one of the ship disposal techniques, ship dismantling involves the retired ships to be stripped off  their machinery, barring the value-adding materials which are rightfully reused for new ships or for other applications.

The steel scraps obtained after dismantling an old ship is used again. Moreover, all other parts such as wooden furniture, glass etc. are also reused for a variety of applications.

Why is Ship Dismantling needed?

Ship dismantling is highly necessary as the maintenance expenses of a particular vessel keep soaring with time and it becomes really difficult to handle the same. Therefore, the shipowners seek the easy way out and hand over the old vessel for effective disposal, so that they can concentrate on dealing with other regular expenses like port charges, fuel charges, and also salaries of the crew members.

How is shipbreaking carried out?

The primary and the most common way to dismantle a ship is by breaking it apart into several different parts before breaking them further. On some of the biggest ship breaking yards in the world such as Alang in India, the process of dismantling starts by beaching the ship on the shore. Several ship breaking contractors have their offices and yards along the coast of Alang, Gujarat.

The vessel on its final journey needs to float steadily and hit the beach of the shipping yard where it staggers and stops. Once on the shore, the engine is shut down and the anchor is dropped to make the ship steady. The ship breakers then start working after preparing a plan. 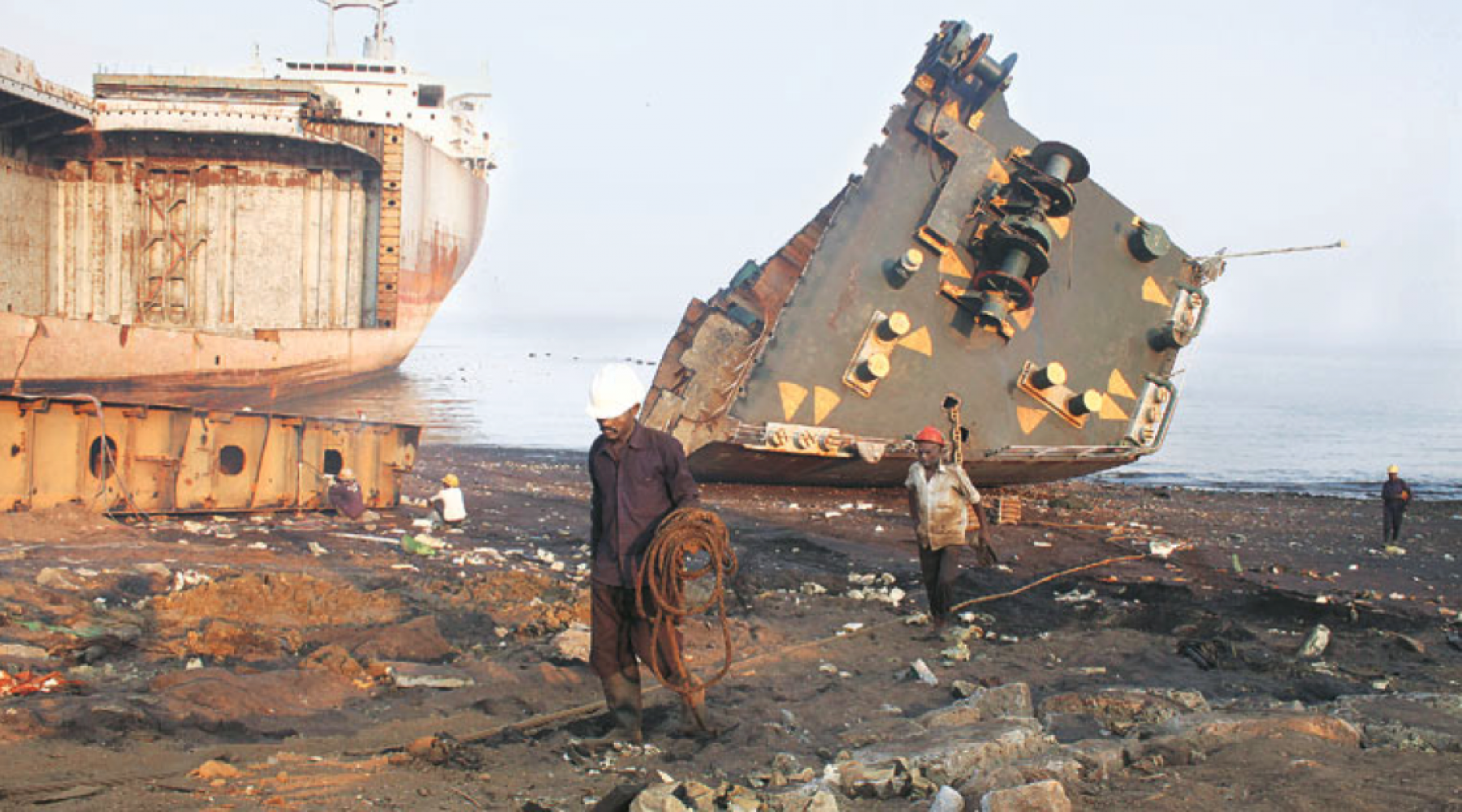 At the site, the laborers pull the vessel upon the beach, with the help of strong chains, cables, and machinery systems. This is one of the most dangerous tasks of the ship dismantling process. Sometimes chains might break during the process, leading to unfortunate accidents Several regulations have to be followed for dismantling a ship. 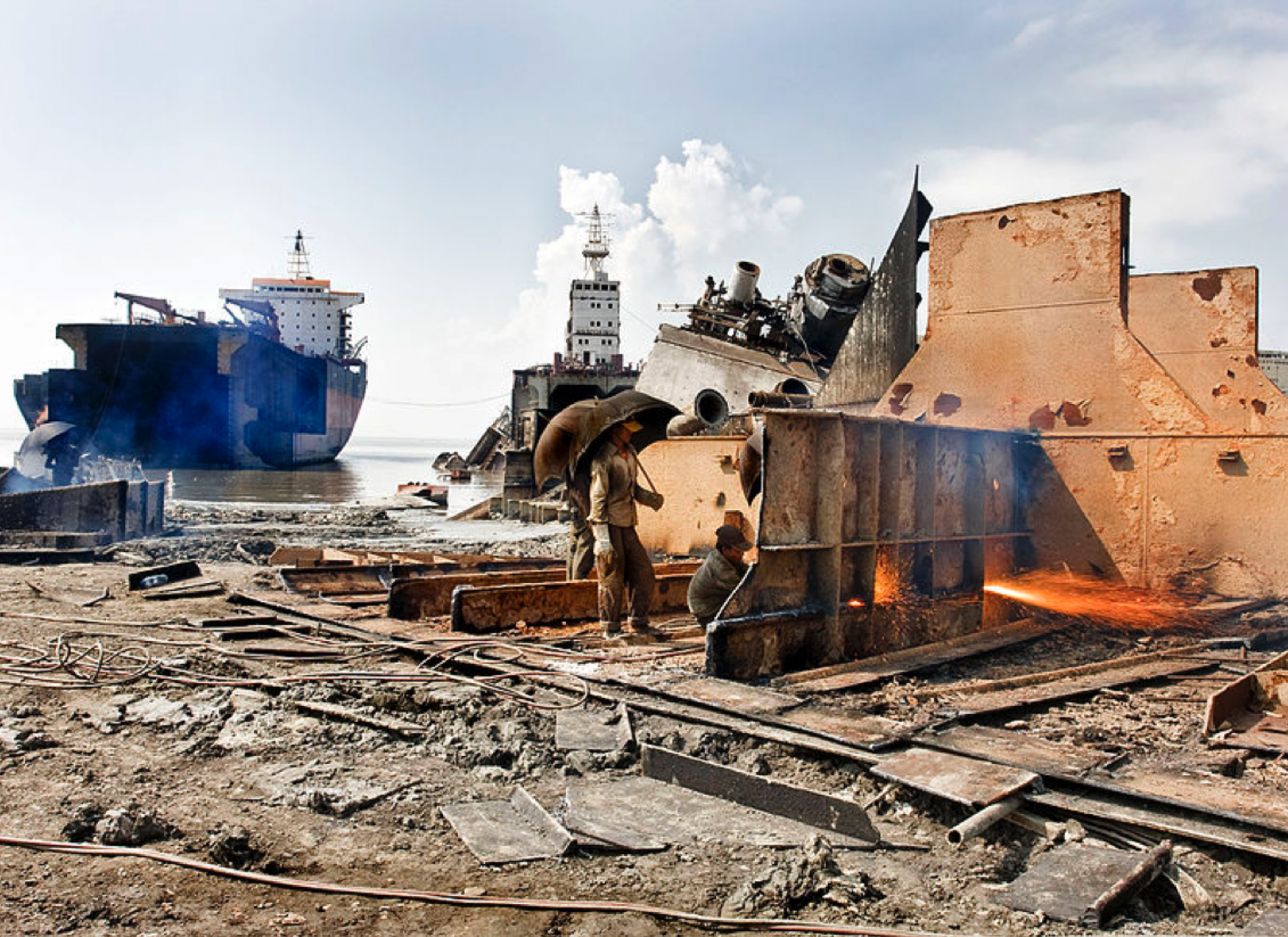 Several regulations have to be followed for dismantling a ship. The Hong Kong International Convention for the Safety and Environmentally Sound Recycling of the Ships, 2009, was adopted (but didn’t entered into force) to ensure that the ship breaking procedure do not pose any unnecessary risk to human health, safety and environment. However, at ship breaking yards in developing countries hardly any laws are properly followed, which has caused great danger to the human life the environment and great harm to the workers.

Also, before the dismantling process starts, the fuel tanks of the ships are completely drained to prevent any accidental explosions in the yard. Then the “scrappers” take over the particular vessel to explore it and locate useful items that may include flags, liquor, plumbing, electrical wiring, electronics, furniture, and machinery. All these items are reused or sold in the local and reusable items at bargained price market.

The real demolition of the ship begins after the initial scrapping process is over. The shipboard supervisor and other authorized personnel will then inspect the entire ship and decide the immediate course of action. Technically, there are no basic guidelines as such on how to break a ship. It is the intent observation and countless project experiences of the advisors that counts in the process rather than any bookish knowledge. However, strict safety guidelines need to be followed by everyone involved with the ship dismantling procedure.

As the actual dismantling starts, the ship breaking laborers are armed with a variety of torches, sheer elbow greases and sledgehammers to tear down the anatomy of the ship. The period of disassembling can vary anywhere from two weeks to even twelve months.

Ship dismantling is regarded to be one of the most dangerous professions in the world as it involves a great amount of risks and hazards. Several guidelines and programs have been formed be tackled the consequences and control the oddities of this profession. It is definitely a Herculean task to break apart a sturdy ship as it had been built to be impregnable so as to withstand the harsh weather conditions and ocean storms and support countless tons of cargo.

Many toxic ships contain dangerous substances such as asbestos, petrochemicals by products, lead, mercury, Polychlorinated Biphenyls, radium, poisons and heavy metal machinery, which are extremely harmful to humans and environment. Moreover, the workers work with the least personal protective equipment and in really rough weather and temperature conditions.

The laborers are also extremely poor and desperate to earn some quick money. They are subjected to mortal perils every single day and the death toll in such ship breaking yards are rising in spite of all the precautionary measures.

Where does the Ship Dismantling business thrive?

Due to the large availability of cheap labours in poor nations such as Bangladesh, China, Pakistan and India, ship dismantling business is thriving in these regions. Around 85 percent of the world’s shipbreaking activities occur in these above named countries. The sites located in India are highly favourable as the shipyards offer high tidal ranges, 15-degree slopes and the coastlines are free of mud.

As ships do not survive on water for more than thirty years, ship recycling becomes a necessity. Moreover, the recycled steel is a boon to the steel plants. Such graveyards in developing countries of Asia is a thriving business.

How it does affects the environment?

Disassembling of vessels comes at a huge price for it causes various environmental hazards. The non-eco-friendly dismantling techniques are a serious international concern and stringent regulations are implemented to prevent the disastrous consequences.  Especially, the companies that engage in the beaching dismantling method, face stern opposition as beaching affects the ecosystem a lot. Interestingly, the ship disposal companies flourish in the third-world or developing nations, mainly because of the easy availability of cheap labour.

Also the scrap price in these countries makes it attractive for cash buyers to dismantle ships in India, Bangladesh and Pakistan.

Other favourable conditions may include the slackened laws when it comes to environmental protection or labour health, and the ever-increasing demand for steel. This tragic lack of definite government rules leads to an inevitable bout of pollution in such countries and the rate at which the workers are injured just keeps on increasing.

On the one hand, ship dismantling plays an important role in the local economy of these countries: steel mills need scrap and many parts of the ship can be recycled or re-used. However, the beaching method has several handicaps:

As a result, ships can only be dismantled in an environmentally sound way via a beaching method, if they arrive cleaned and free of all type of hazardous waste. That would mean that a ship would go first to a well-equipped yard before it arrives on shore in South East Asia. This approach will probably mean, that the profit of using such yards will disappear as snow for the sun.

Many interest groups defend the beaching policy for reasons of lack of dismantling capacity in industrialised countries. But is this the case? Many (new building) shipyards in European countries have been closed due to the unfair competition of South Korea and other Asian countries. Re-opening of such yards would contribute to the employment in Europe and guarantee a better environment for an environmental sound dismantling of ships. 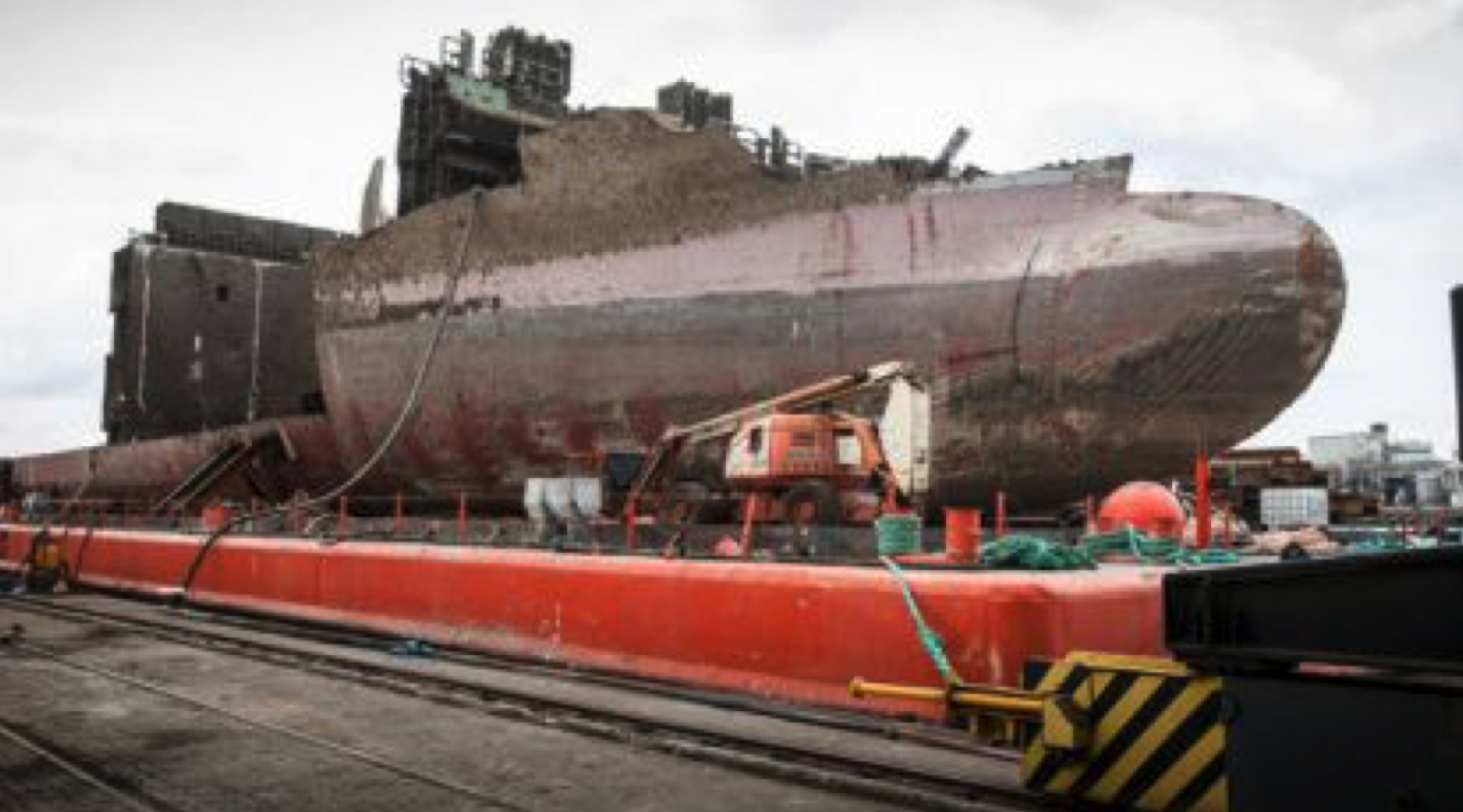 Euroshore members are willing to contribute to responsible and environmental sound ship dismantling.